skip to main | skip to sidebar

In these hard and gloomy times 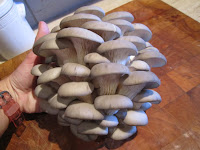 In these hard and gloomy times I'm thinking it will be fun to try for a while to eat as much as possible from our own production or even wild food. Fun, plus a relief for the bank balance. We've got a freezer packed with food from the summer, we have veggies coming along in the veg patch (if we can save them from the wild boar), and there are still a few (very few) edible wild plants to pick. In fact, if I remembered anything I learnt from the mushroom course I did a few years ago (to gather mushrooms in Italy you officially have to have a 'patentino' or licence, which you get by attending a course and then renewing it yearly) then I'd go mushrooming, but what I principally recall is how frighteningly similar the edible ones look to the deadly poisonous ones. Oh, and how one toxic mushroom tricks you before killing you, giving you immediate and severe symptoms of food-poisoning from which you quickly recover, only to be struck down a few weeks later, by which time you have multiple organ failure and you — die. Which celestial joker thought that one up?
But I digress. For we do have mushrooms — home-grown ones, real beauties. I bought a kit, basically a sort of spore-impregnated bale, and it sits in the cantina putting out amazing growths of pleurotus (oyster mushrooms). Far too many, in fact, as we can't get through them all (the Boy doesn't even like them) and I don't know how to preserve mushrooms. For now I've decided to head back to the 1970s and make cream of mushroom soup, and if it's nice then I'll make a load and freeze it.
And speaking of soup, the warm autumn has given us a good crop of nettles in the hedgerows, and as everyone knows, nettle soup is The Best. Tasty, health-giving and absolutely free. Some people may mock (and you know who you are) but they obviously need a little help in appreciating the finer things in life. I can give that help. Nettle risotto, anyone?
Posted by Kirsty at 10:13

Promote your Page too

Stay at Palomba! Feed the chickens, groom the pony, walk the dog, dig the veg patch ... no, okay, relax on the terrace, swim in the lake, hike in the hills ... it's your holiday!
Check out our rental apartment at www.palomba.it

Kirsty
Camerino, Marche, Italy
I live in an old converted farmhouse in central Italy with my partner John and our son Alessio, aged 14. We scrape a living as a copy editor and graphic designer respectively (haven't yet sent the boy out to work, but it can't be long) and we rent out a pretty apartment during the summer. It's a really nice place to stay and this is a great area for a holiday. Great area to live, too.